The rice plant is an annual grass that produces an edible seed, which is the actual rice. Rice is an aquatic plant and is commonly grown in flooded fields. Rice cultivation is well-suited to countries and regions with low labour costs and high rainfall, as it is labour-intensive to cultivate and requires ample water. Rice can be grown practically anywhere. The life cycle of rice cultivars ranges from 110 to 150 days from germination to maturity, depending on the variety and the environment. Rice is a good source of protein and a staple food in many cultures worldwide, but it is not a complete protein: it does not contain all of the essential amino acids in sufficient amounts for good health, and should be combined with other sources of protein, such as nuts, seeds, beans, fish, or meat.

Methods of growing differ greatly in different localities, but in most Asian countries the traditional hand methods of cultivating and harvesting rice are still practiced. The fields are prepared by ploughing (typically with simple ploughs drawn by water buffalo), fertilizing (usually with animal dung ), and smoothing (by dragging a log over them). The seedlings are started in seedling beds and, after 30 to 50 days, are transplanted by hand to the fields, which have been flooded by rain or diverted river wate by canals to fields. During the growing season, irrigation is maintained by dike-controlled canals or by hand watering. The fields are allowed to drain before cutting. 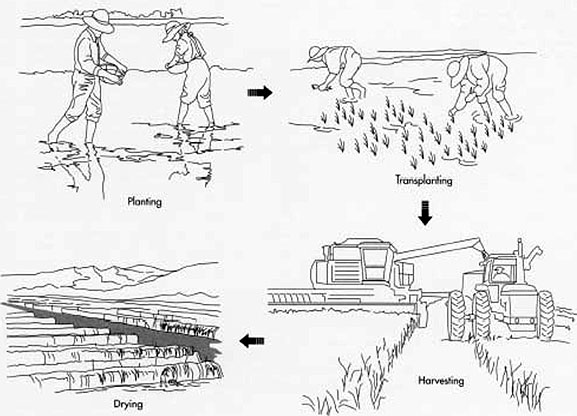 Transplanting is the most popular plant establishment technique of cultivation across Asia. Transplanting is when pre-germinated seedlings are transferred from a seedbed to the wet field. It requires less seed and is an effective method to control weeds, but requires more labour.

Prior to transplanting, seedlings are established in a separate nursery area. They are grown here for between 20 and 80 days before they are transplanted to the field. Seedlings may be transplanted by either machine or hand.

Unmilled rice, known as paddy, is usually harvested when the grains have a moisture content of around 25%. In most Asian countries, where rice is almost entirely the product of smallholder agriculture, harvesting is carried out manually, although there is a growing interest in mechanical harvesting. Harvesting can be carried out by the farmers themselves, but is also frequently done by seasonal labour groups. Harvesting is followed by threshing, either immediately or within a day or two. Again, much threshing is still carried out by hand but there is an increasing use of mechanical threshers. Subsequently, paddy needs to be dried to bring down the moisture content to no more than 20% for milling.

A familiar sight in several Asian countries is paddy laid out to dry along roads. However, in most countries the bulk of drying of marketed paddy takes place in mills, with village-level drying being used for paddy to be consumed by farm families. Mills either sun dry or use mechanical driers or both. Drying has to be carried out quickly to avoid the formation of moulds. Mills range from simple hullers, with a throughput of a couple of tonnes a day that simply remove the outer husk, to enormous operations that can process 4,000 tonnes a day and produce highly polished rice. A good mill can achieve a paddy-to-rice conversion rate of up to 72%, but smaller- inefficient mills often struggle to achieve 60%. These smaller mills often do not buy paddy and sell rice but only service farmers who want to mill their paddy for their own consumption. 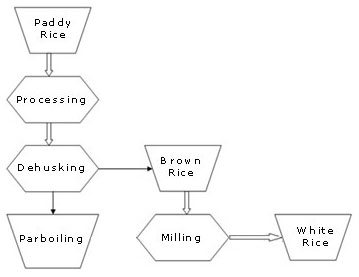 The seeds of the rice plant are first milled using a rice huller to remove the chaff (the outer husks of the grain). At this point in the process, the product is called brown rice. The milling may be continued, removing the bran, i.e., the rest of the husk and the germ, thereby creating white rice. White rice, which keeps longer, lacks some important nutrients; moreover, in a limited diet which does not supplement the rice, brown rice helps to prevent the disease beriberi.

Either by hand or in a rice polisher, white rice may be buffed with glucose or talc powder (often called polished rice), though this term may also refer to white rice in general. Parboiled,Broken rice or left over second grade broken rice will be processed into flour. White rice may also be enriched by adding nutrients, especially those lost during the milling process. While the cheapest method of enriching involves adding a powdered blend of nutrients that will easily wash off (in the United States, rice which has been so treated requires a label warning against rinsing), more sophisticated methods apply nutrients directly to the grain, coating the grain with a water-insoluble substance which is resistant to washing.

In some countries, a popular form, parboiled rice, is subjected to a steaming or parboiling process while still a brown rice grain. This causes nutrients from the outer husk, especially thiamine, to move into the grain itself.

Despite the hypothetical health risks of talc (such as stomach cancer), talc-coated rice remains the norm in some countries due to its attractive shiny appearance, but it has been banned in some, and is no longer widely used in others (such as the United States). Even where talc is not used, glucose, starch, or other coatings may be used to improve the appearance of the grains.

Rice bran is a valuable commodity in Asia and is used for many daily needs. It is a moist, oily inner layer which is heated to produce oil. It is also used as a pickling bed in making rice bran pickles and takuan.

Raw rice may be ground into flour for many uses, including making many kinds of beverages, such as amazake, horchata, rice milk, and rice wine. Rice flour does not contain gluten, so is suitable for people on a gluten-free diet. Rice may also be made into various types of noodles. Raw, wild, or brown rice may also be consumed by raw-foodist or fruitarians if soaked and sprouted (usually a week to 30 days – gaba rice).

Processed rice seeds must be boiled or steamed before eating. Boiled rice may be further fried in cooking oil or butter (known as fried rice), or beaten in a tub to make mochi.